For those who are not familiar, Brett Kiesel was a pro bowl defensive lineman who became synonymous for his aggressive playing style, love for Pittsburgh and signature beard. What many do not know is that Brett has a passion for philanthropy, including his ‘Shear The Beard’ campaign where Brett would shave his beard to raise money for Children’s Hospital. After 10 years of organizing and hosting the campaign, UPMC Children’s wanted to show their appreciation with a custom wall wrap featured in the middle of UPMC Children’s Hospital.

After having the opportunity to view our work with the Ronald McDonald House Charities Care Mobile, UPMC Children’s contacted our team at Stick to partner on the project. Senior Designer Maria Ashenfelder created the custom wall wrap design by designing a clean, eye-catching collage featuring photos of Brett with local children. Our goal was to create a fun and engaging environmental graphic for all to enjoy.

After the design approval, our team coordinated an after-hours installation in Pittsburgh to ensure we were not being intrusive to the hospital staff or patients. The UPMC Children’s team then hosted a surprise unveiling for Brett, presenting the former Pittsburgh Steeler with his tailored wall wrap design.

Our team at The Stick Company specializes in creating custom healthcare wall wraps, environmental graphics, and various distraction therapy wall wraps, and feel they are a great way to bring a unique design and visual to any hospital or Medical Center.

To learn more about UPMC Children’s Foundation, be sure to visit their website at https://www.givetochildrens.org/. 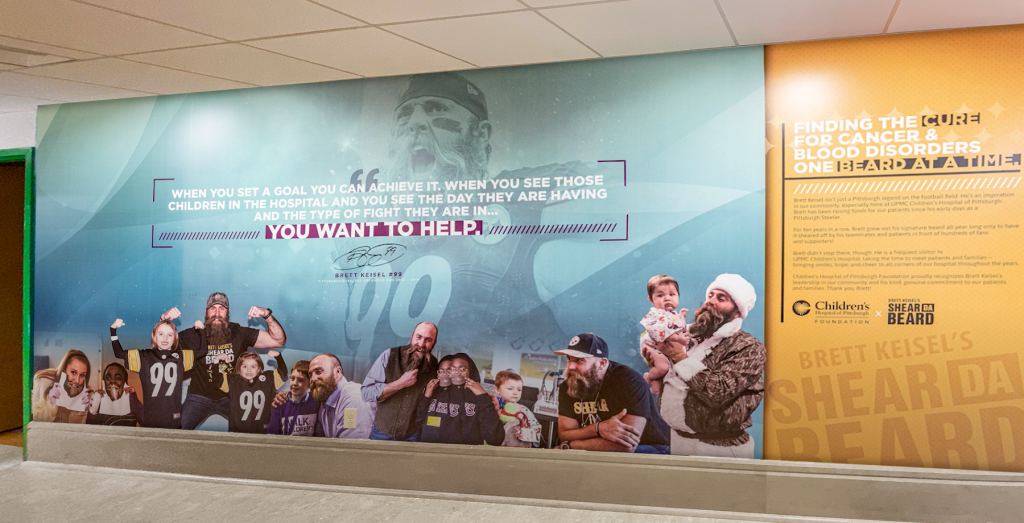